The Tamil Nadu government on Tuesday partially reversed its earlier order allowing TASMAC liquor shops to operate in the state from May 7. In its new order the state government said, while the TASMAC shops will open in the rest of the state from Thursday, it will continue to remain shut in Chennai. 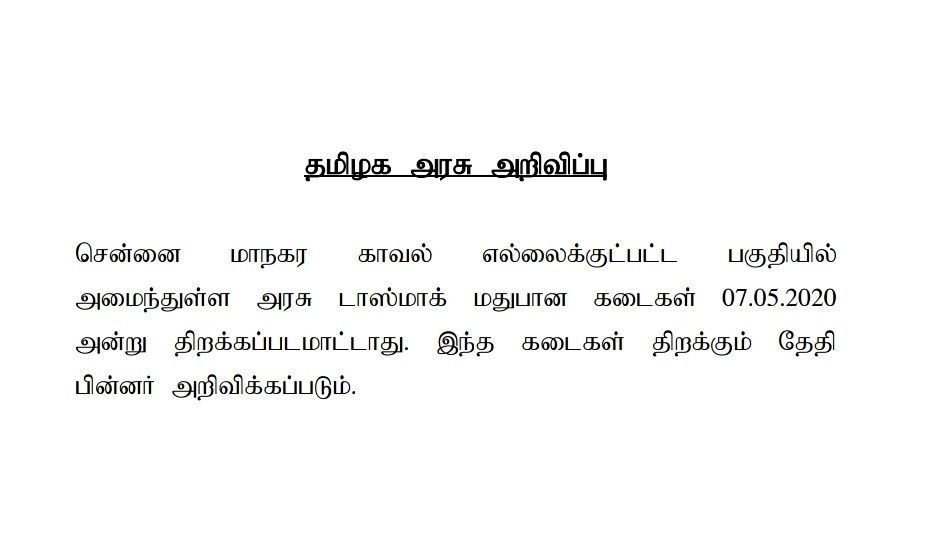 The new order came after the government received flak from political parties and social activists for allowing liquor sales in Chennai, which has become a hotbed for fresh Covid-19 cases.

Dravida Munnetra Kazhagam (DMK) president M.K.Stalin on Monday criticised the government for opening the TASMAC shops during lockdown, which in turn will increase the risk of coronavirus spread due to gathering of people.

He also added that it is improper for the government to blame the people for the revenue loss arising out of lockdown.

Makkal Needhi Maiam (MNM) chief Kamal Haasan lashed out at the Tamil Nadu government saying, “The government which couldn’t save the Koyembedu market, which was responsible for increasing corona numbers will now open the TASMAC liquor shops.”

“Does the leadership even understand that every wrong step will take their lives?” ,he asked

The actor was referring to the spike in the number of new cases emerging from the Koyambedu wholesale vegetable and fruit market.

Of the 266 cases recorded in Chennai 215 were found to have links with the market. The government has temporarily shut the Koyambedu market and shifted it to Thirumazhisai satellite town.